Our exercise adaptations are the product of two main signaling systems—the endocrine system and the nervous system. While it seems a gross over simplification, in reality our hormones, and nervous signaling, control how well our body responds to the stress that we subject it to.

Training intensity has either a constructive, or destructive, effect on each. Learn to use it productively and you’ll create a muscle constructing internal environment.

Rather Listen? Do that shit by clicking the link below!

We’re not removed from the conversation—humans undulate too. Our daily rhythms and our chemical environment serve as two undulating physiological examples.

As smart lifters, trainees and coaches, we’ll consider undulation as it relates to our weekly training intensity.

We’re freshest early in the training week. Once you move past the obviousness—and near needlessness— of that statement, let’s move on. It’s when we can exert the most energy and train most intensely. That’s why the neural-metabolic training continuum places heavy neurological loads early in the week and heavy metabolic loads at the end of the week.

But early week heavy training does us another solid beyond making us stronger—it employs the nervous system to affect our hormonal system.

Heavy, compound lifts jack up testosterone—especially when the loads creep up to 8-9 RPE, or more, and are lifted until near failure. This isn’t a news flash, but it’s an element of muscle building that’s often ignored. (Side note: we’re not proponents of the near failure element of the equation. It’s not completely necessary and too much bad shit can happen training to failure’s cusp.)

So what does this mean for you in terms of your current program? It means “crush” yourself on Monday. Follow the RPE and loading guide, but if you’re going to challenge loads, and push to the upper-limits of prescribed RPE, Monday is the day to do it. Neurologically we’re freshest—barring weekend debauchery. Heavy loads early in the week also create a hormonal environment that spurs adaptation throughout the week. We challenge the body, creating a large hormonal disturbance and then stimulate throughout the rest of the week.

The first “off” day, when it comes to strength training—Wednesday’s Neural Charge—is the first undulation example. Stress is dropped into the stimulation/recovery zone. 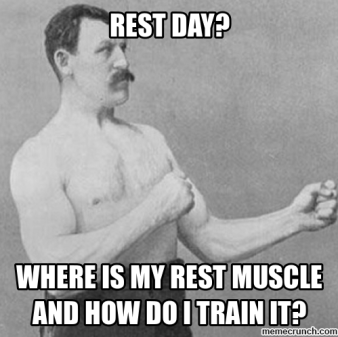 Dropping stress on day 3—and again on day 6, with Fury Saturday—of the training week gives the body the chance to adapt to day 1’s neurological and hormonal barrage without creating too much stress. Overload the body’s stress tipping point and recovery is nil—taking Monday’s great work and flushing it down the toilet. Our “off” days stimulate the body to drive recovery while allowing it time to adapt to the disturbance we’ve created.

Takeaway: Stimulate on off days to spur recovery and adaptation

The week’s remaining lifting days are intense, just not as intense as day 1. It’s ok to walk out of the gym on day one feeling like Rhonda Rousey’s face after Holly Holm kicked it to death, again, due to pushing the RPE. It’s not ok to do that the rest of the week—think “heavy stimulation.”

Push yourself, but stay in the middle of the RPE range. Walk out of the gym feeling like you’ve lifted, but not like Holly worked over your no-no parts. With her knuckles, of course, with her knuckles!

Manage intensity in this way, ladies and gents, and you’ll accrue bountiful muscle and strength!

In 2010, two dudes Chris and Todd, started the business that would eventually become Strength Faction.

You know how they say the rest is history? Well, it’s not.